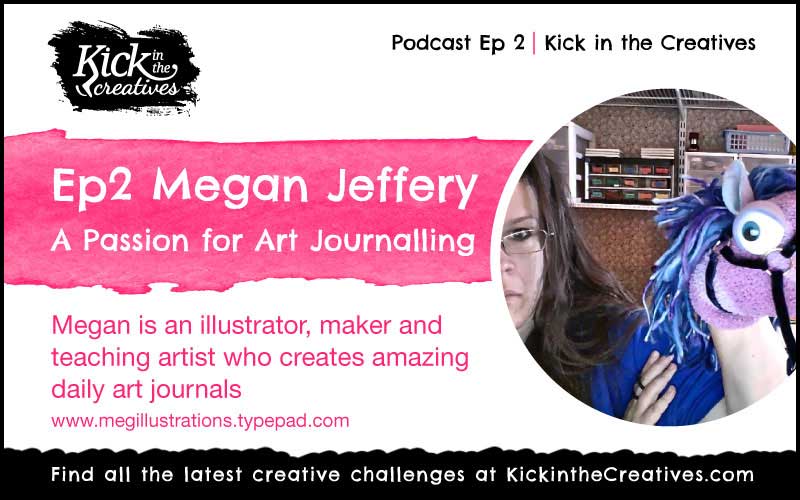 Megan Jeffery is an illustrator, maker and teaching artist who lives in Connecticut. She came from a family where they were always making things. They used up a lot of old things that would normally be thrown away for art and craft. She continues to do this to today.

Megan has always had a lot of notebooks. When she was a kid they weren’t necessarily journals, but she used to write and draw in them. She also used to attend a lot of art and craft camps as a child. When she was in second grade at school she decided she wanted to be an illustrator. Later she went to Rhode Island School of design and got a degree in Fine Art and illustration. 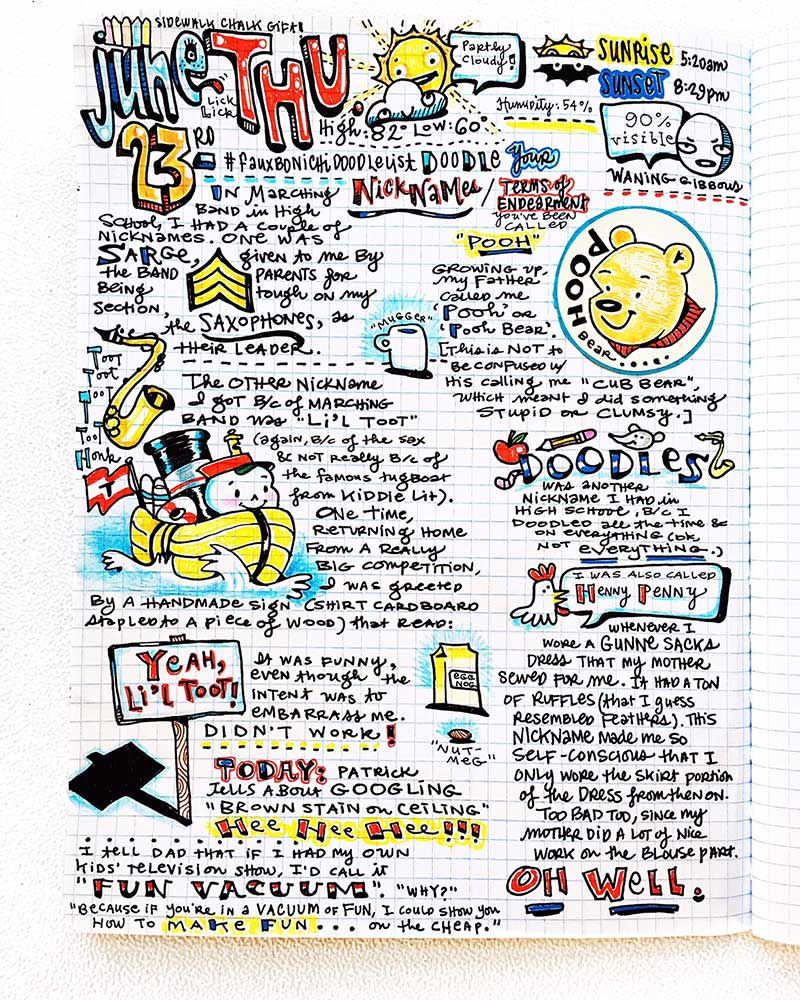 Megan first got inspired to start journalling when she saw some Youtube videos by Liz Drake She saw she was doing something called Faxubonichi. This was using stuff that she already had in her home. Megan liked the idea of using existing “junk” that she already had, it was very much like her childhood.

Megan also finds she gets ideas for her work through her journalling. Sometimes the prompts that people give through different challenges spark off new ideas via word association. They might give her ideas for characters or images. 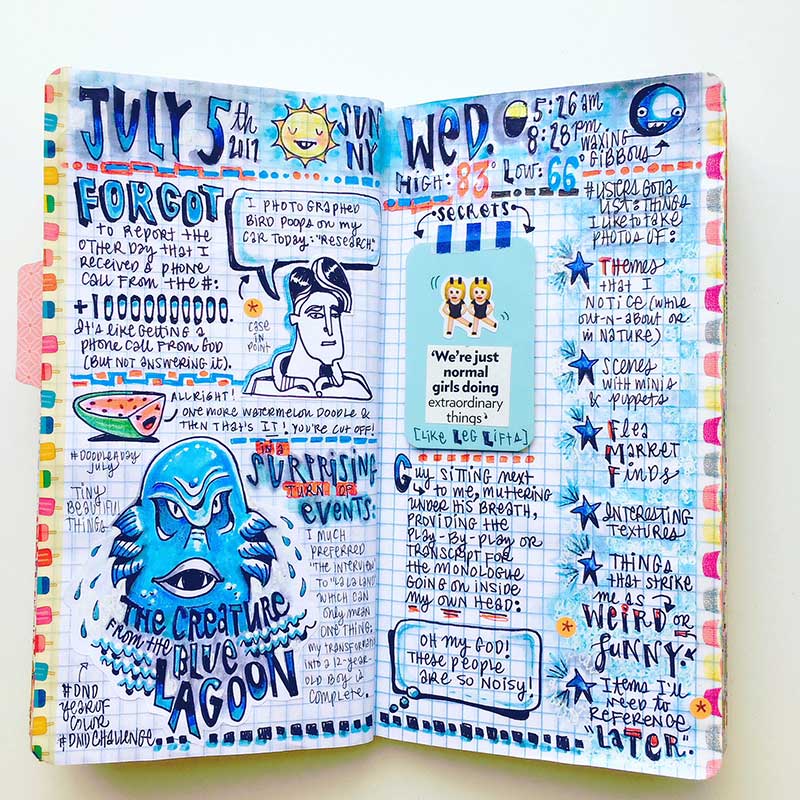 Tips for starting an art journal

Megan likes to use cheap composition/exercise books for her journals. She covers the front and back of them and makes it look like “her” or the season, she will also laminate it. Inside she glues 2 pages together with a glue stick so that markers or wet media don’t bleed through. She washy tapes the edges too. She likes the fact that using cheap composition books means that you don’t have to be precious about your work. If you make a mistake it doesn’t matter and if worst comes to worst you just start a new one. Start off by putting simple things like the date and the weather/temperature. You can also put the type of moon for that day. By doing all this you have immediately got rid of the scary blank page.

Megan also paints and creates puppets. She has a series of paintings on her blog “Girls in a Dress” which were inspired by a book called 100 Paintings by Tim Biskup. She has completed about 30 paintings so far. Claudine Claudine Hellmuth also has a book called Collage Discovery Workshop, where she explains how to make backgrounds that you weren’t expecting. Megan started the paintings by creating a background and then seeing how she could make what she created into a Girl in a Dress. 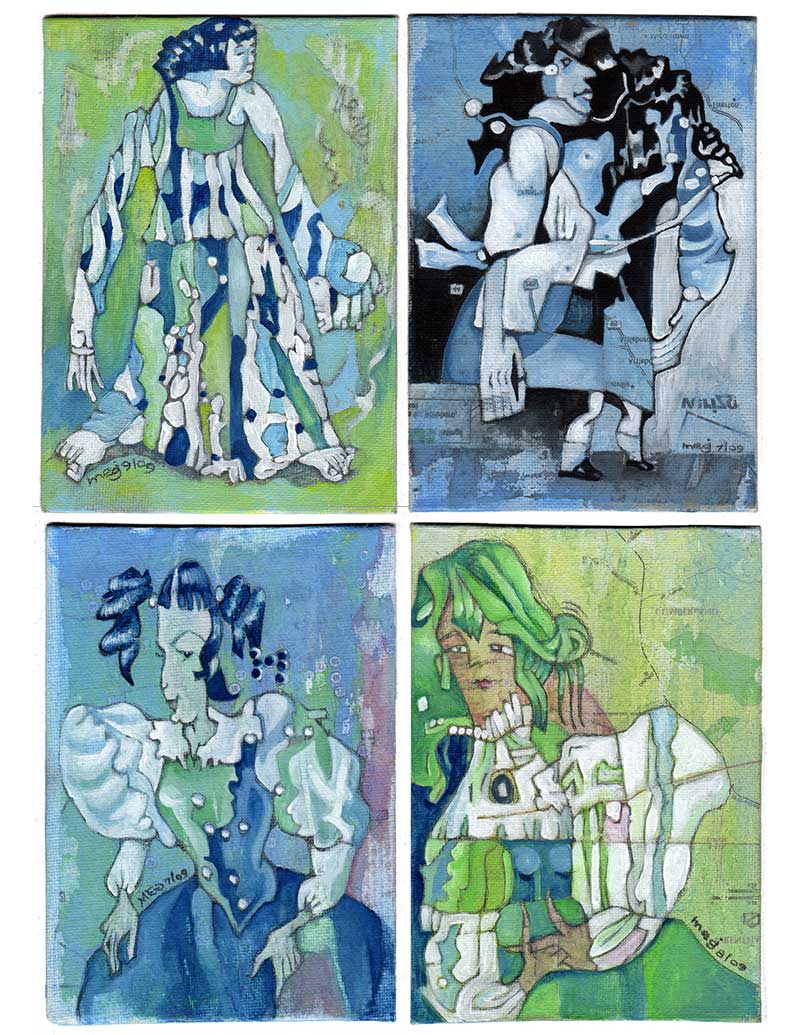 The finger puppets that Megan makes were inspired by a magazine from Martha Stuart. It was a craft that Megan had not yet explored and so she wanted to try it. Megan enjoys going into detail and so the puppets became very elaborate. She sold the puppets at craft shows and stores and did an exhibit at the children’s museum.

Megan is now trying a sketchbook challenge. If you are intimidated by drawing she suggests having a conversation or listening to a podcast at the same time. This means you can allow yourself to draw freely, without worrying what your drawing looks like. When she starts sketching she might begin with an object that is in the room like a lamp but then adds to it with patterns and things from her imagination.

Syllabus: Notes from an Accidental Professor by Lynda Barry

Year of The Doodle by Dawn DeVries

Where to find Megan

You can find Megan on Instagram and on her blog www.megillustrations.typepad.com/beetlegrass/