What’s It Like to Attend Your First Art Workshop? 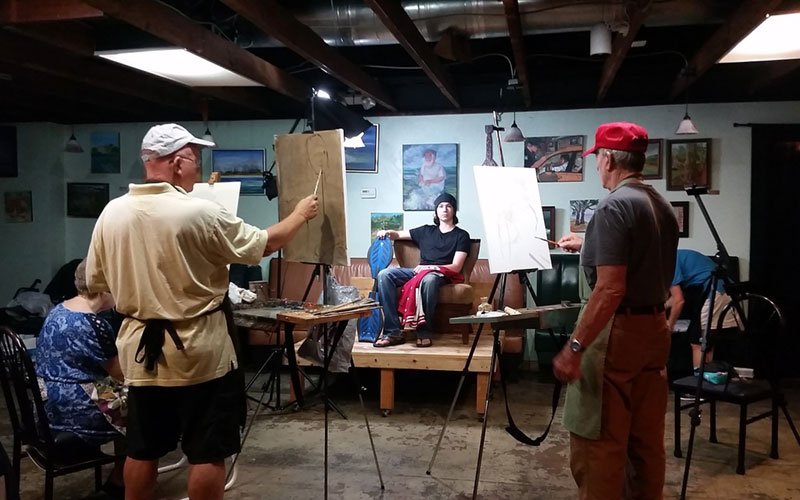 If you’ve been thinking about attending an art workshop, but have never been to one before, no doubt you have a few concerns. I recently attended my second ever art workshop (the first one was more of a very basic watercolour class). I thought I would share some of my concerns before the workshop and hopefully put your mind at rest to give it a go.

Some of the things that were worrying me

What should I wear?

As ridiculous as it might seem, I was slightly worried about what I was going to wear. I made a joke Facebook page post about it, asking what I could wear without looking like I’d raided lost and found. Now if I was going to do something at home I would just throw on a pair of old tracky bottoms and an old sweatshirt I hadn’t bothered ironing. But, as I had never met these people before, this definitely wasn’t going to make a great first impression. Comments came in on my Facebook posts suggesting old shirts and aprons. I didn’t have either, so in the end opted for an old pair of combat trousers, an old t-shirt and some walking trainers. Basically, nothing that I would care if I spilt acrylic paint on, but nothing that made me look like a vagrant either. When I got there a lot of people wore similar things with the addition of some aprons.

Would the other people be friendly?

I can’t promise that the people at your art workshop will be friendly, but most of them were at mine. One good thing about an event like this is that you already know you have a common interest, ‘art’.  This means you can easily start a conversation. It’s always those first words that are the hardest and after that it’s fine. When I got there one of the organisers showed me where I could sit, where I could help myself to tea and coffee and get water for paint etc. There were about thirty artists in total who attended the workshop. Quite a few were of retirement age, but also some who were anywhere between 30 and 60.

How good would the other people be?

While I am reasonable at drawing, I don’t paint much. I wondered what the level of the other artists would. I needn’t have worried as there was a wide range of abilities. One woman I spoke to said she only ever painted when she came to a workshop. But then there were others, like the lady who sat behind me who had recently exhibited at a local gallery with a friend. The other artists were also very open to sharing advice if you asked. The artist who taught the workshop was very friendly, he must have been about thirty, and reminded me of a surf dude.

What materials should I take?

The workshop I went to was about using acrylics to paint strong lighting. I had some really big tubs of acrylic paint that I had taken out of the loft, but decided I didn’t fancy lugging them around. So I took a very basic set of really cheap Acrylic paints that I had bought from “The Works”. It cost the grand total of £4 for 6 good size tubes of paint in red, yellow, blue, green, white and black. I would never really use green or black straight from the tube, but because of my limited palette I did use the black mixed with other colours.

I was slightly dubious what the cheap paints would be like, but they were perfectly fine for practising. I also bought a few cheap small/medium canvas boards from the same shop. I already had some cheap brushes, paper palette, pencils and eraser, water pot and I took some paper towels too.

A lot of people had table easels, I haven’t got one, although I wished I had. I daren’t sit on a chair as they were cloth covered ones. Me + acrylic paint + cloth covered chair is not a good combination, so I stood and looked down at my painting which hurt my back after a while. So I would suggest taking either an easel or something to cover your chair.

The one thing I did forget, or rather didn’t even consider was taking a table cover.  When I got there everyone was busy covering theirs with cloths. The organiser said I could share her table, but instead, I raided my car for plastic carrier bags, tore them up and covered my table with those.

How would the workshop be structured?

The website had mentioned I little about the structure of the workshop so I had some idea what to expect. It started with a demo at one side of the hall. The artist at an easel with us in chairs surrounding him. He showed us how to create a black and white study with strong lighting.  and then gave us 20 minutes to do something similar. He had a box of reference photos we could use or we could choose something of our own.

After the black and white study, we had another demo by the artist but this time using colour. It’s amazing how quickly someone who knows what they’re doing (and have probably painted the same photo before) can paint. We then had the rest of the day to paint a colour picture, breaking whenever we wanted for lunch. I used the same reference picture of Bob Marley that I had used for the black and white study. The tutor walked around offering advice to everyone as they painted individually.

Would I enjoy it?

The answer was yes. I get a little impatient with paint and so got a little bored with the painting in the afternoon. But it was great to have arty company and meet some local artists.

Have you ever been to an art workshop?

PS: Don’t forget to join our Facebook Group and sign up for our newsletter to get notified of upcoming challenges

Sorry to interrupt, but would you like to know more about our art challenges and podcasts?

We're doing a happy dance, thanks for signing up