How to Draw Hair Easily

How to draw cartoon hair

How to draw female cartoon hair 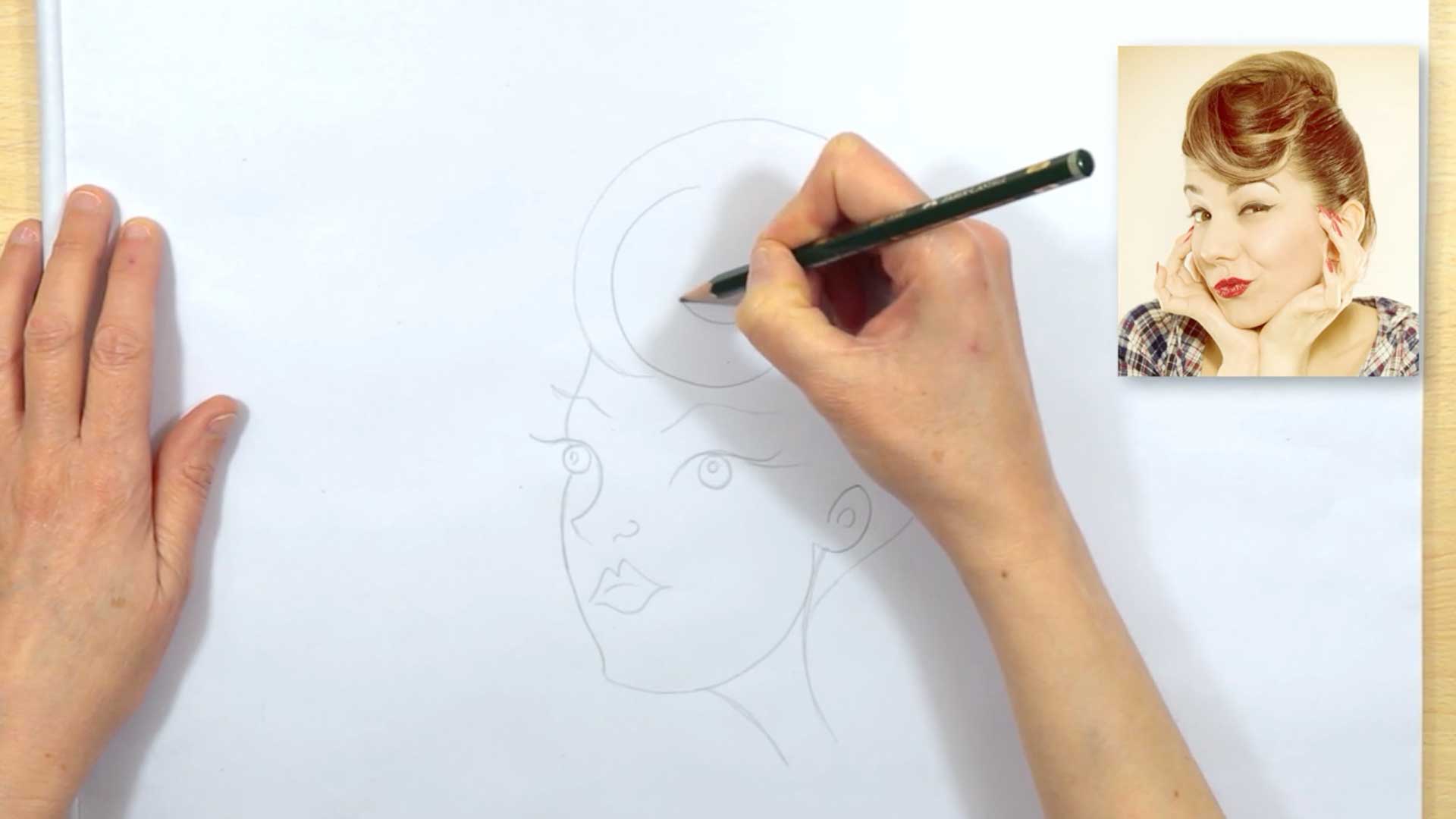 I am basing this cartoon hair on the photo you can see. The woman has a very rounded hairstyle and I am exaggerating that with sweeping lines. You want to look for big shapes rather than strands of hair when you are drawing a cartoon. To see the big shapes of the hair, it often helps to squint, which blurs the image and simplifies it. You can see I haven’t included much detail but given the impression of the curl going around the top of her head with a spiral type line.

Don’t expect that you will get the hair perfect the first time you draw it. Draw lightly in pencil and then go over it with a pen. If you still feel that the cartoon hair needs tweaking, trace over it again and refine it. You can either use thin paper to do this or use a lightbox to see through thicker paper.

How to draw male cartoon hair 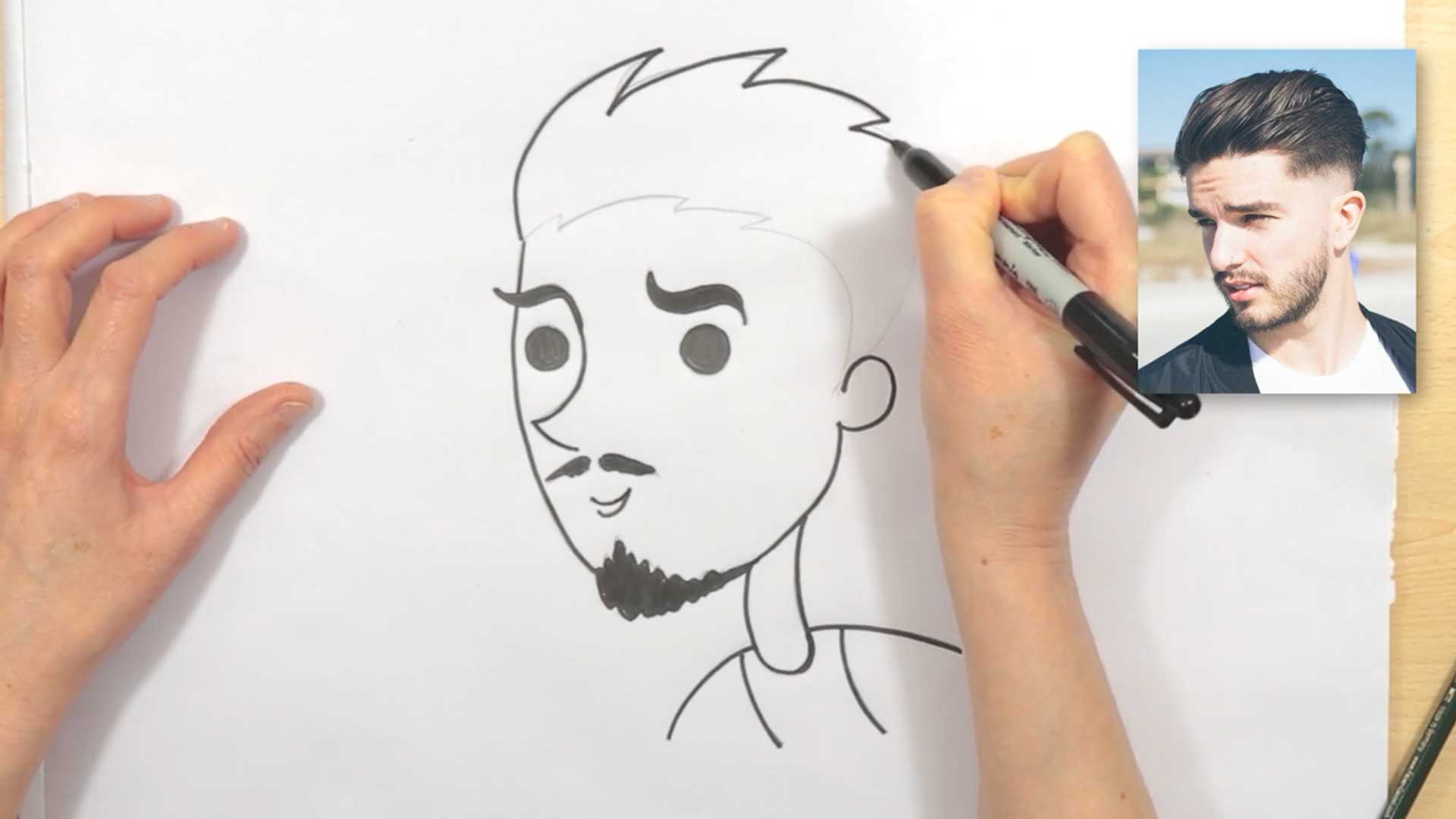 Now we are going to draw male cartoon hair. You can see I have already created a pencil drawing to speed things up. Short hair on a male cartoon is really easy. I am using the reference picture on the right as a guide and have drawn a simplified hair shape. I’ve done this by squinting to see the big shape again. Rather than draw in strands of hair, I have drawn little pointed peaks that stick up on the top of his head. Then I’ve created a few more peaks that break up where his hair meets his head. You can see I have also simplified his beard and eyebrows into simple shapes.

It’s always useful to use a face reference photo even if you are drawing a cartoon. You are not trying to create a likeness but it’s a great starting point for a face and hairstyle shape.

How to draw realistic hair 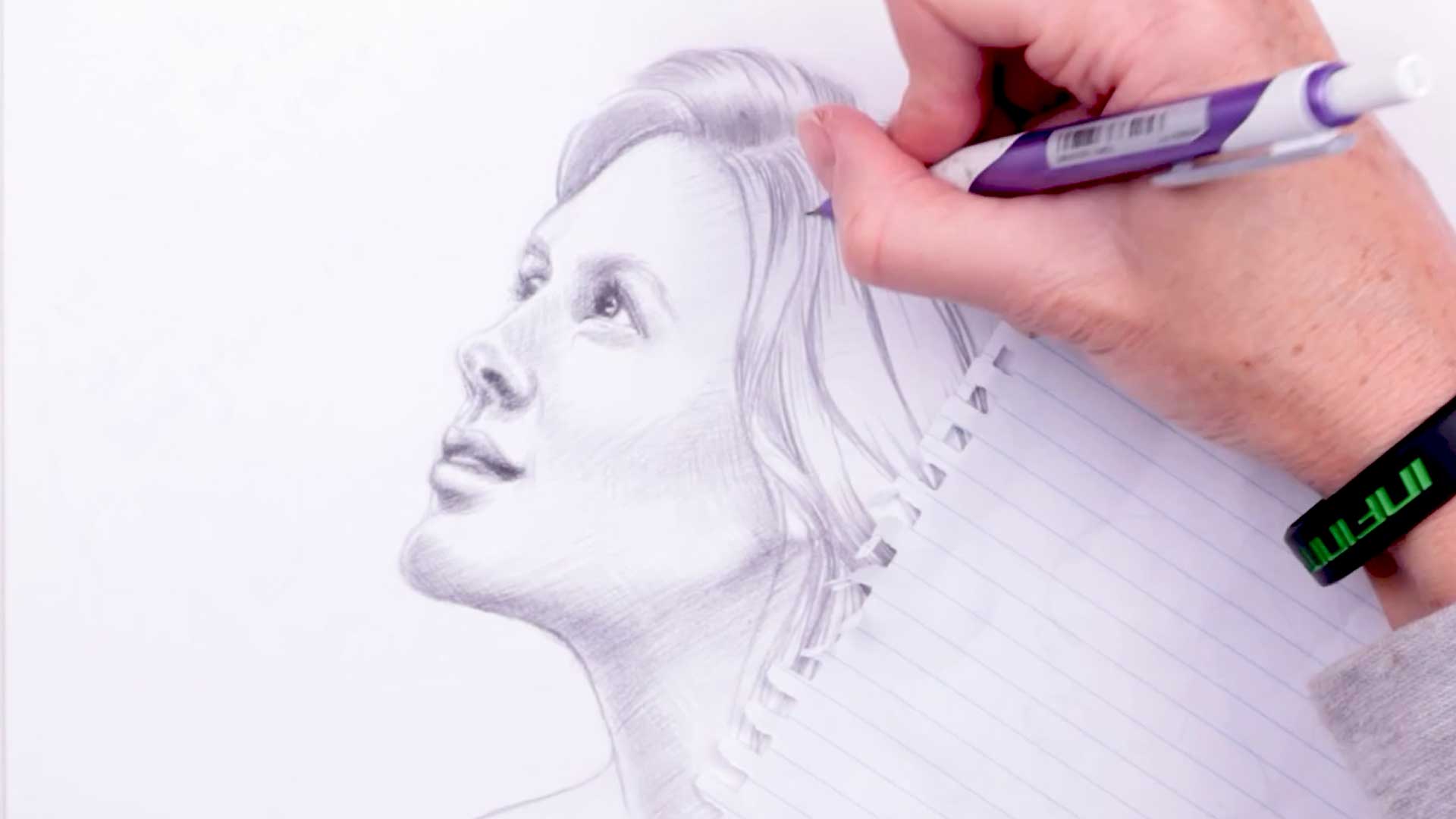 The biggest mistake that beginners often make when drawing realistic hair is trying to draw every single strand of hair, and you don’t need to do that, all you need is to create the illusion of it. So first of all, I’ll start by indicating the direction of the hair growth with my pencil. On each section of the hair, I’ll have a look and see where it’s falling and I’ll follow that. Then once I’m happy with that, I’ll use my cotton bud. I’ll blend and soften those lines with the cotton bud. That alone can indicate hair without having to draw in every single line to represent hair strands.

Next, I’ll start redefining the darks, particularly where hair sections separate. If you go too dark with the shadows you can lift out the highlights again with a putty rubber. The shine is created by defining those darks and then lifting out those lights. The more contrast you have between the lights and darks the shinier the hair will look. I drew this with one pencil which is enough to give a variety of tones.

Sometimes instead of a cotton bud, I use a paper stump, which is also known as a tortillon. Both are great for blending and softening pencil lines. A tortillon has more of a point so you can be more definite about where you’re using it and it doesn’t cover such a large area.

Remember when you’re drawing, that the hair will cast a shadow across the forehead. I use a cotton bud to indicate that. I’ll take a bit of the pencil from the hair and using the cotton bud, blend it into the forehead a little bit. This gives it a three-dimensional effect so you can see it’s lifting off of the face.

How to draw hair curls 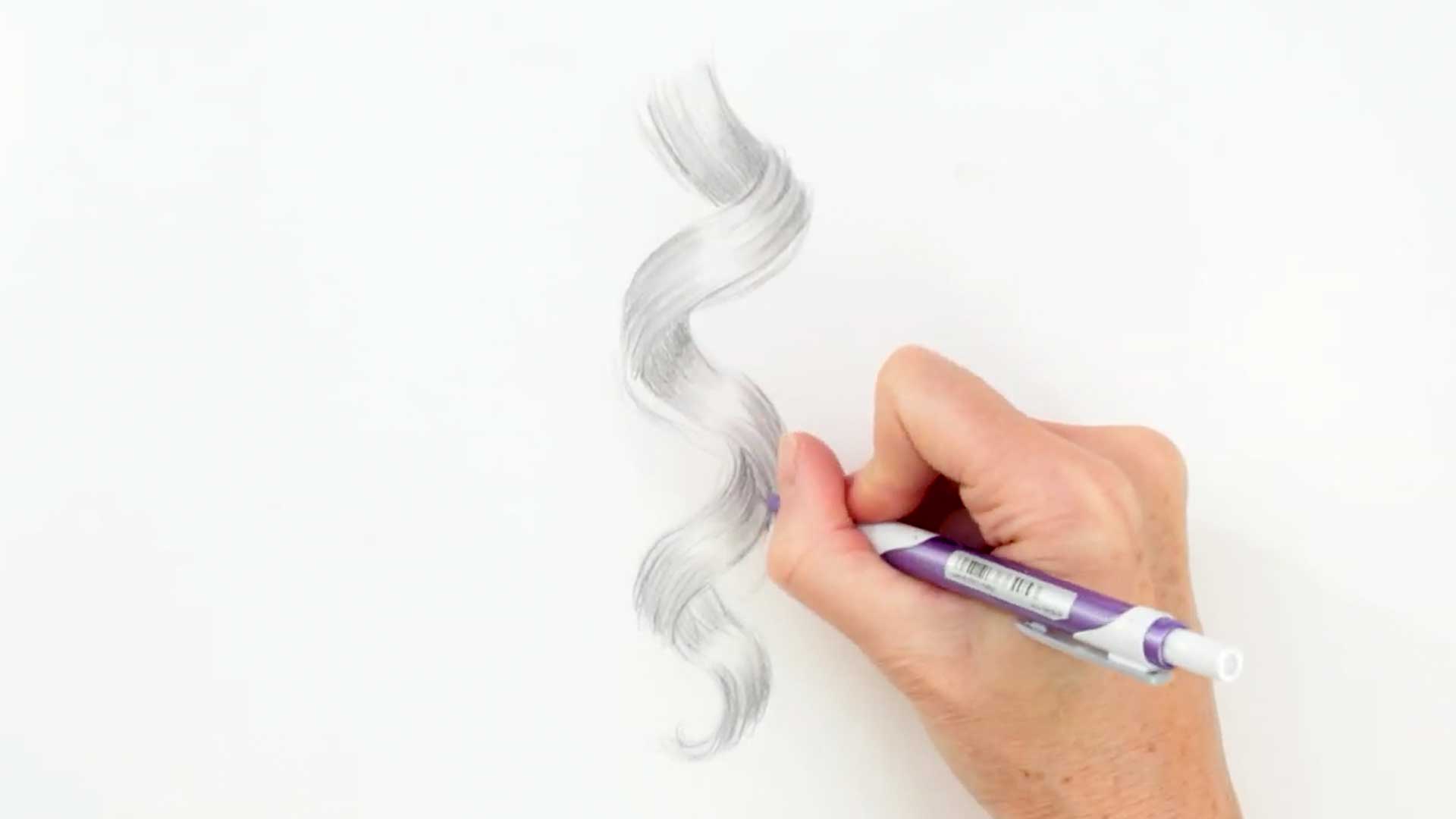 It’s not hard to draw hair curls. All you’ve got to do is observe how the light hits each individual curl. I’m doing the same thing as I did before. I’m starting by defining the direction of the hair growth with my pencil. As the hair twists, I’m indicating the new direction it’s going in. And then I’m going in with my cotton bud to blend those lines to make them softer. Then I’m going back in and redefining the darks, in particular where the hair is separating.

Hair is not perfect. So you do need to make sure you add those random bits of hair that aren’t in the curl and are sticking out. I then go back in with my eraser just to pull out those highlights a little bit more where the light is hitting the curl. Then, I darken the shadows that are cast where the hair twists over itself because it will cast a shadow on the hair beneath. And you can just keep going on and on until you achieve the level of realism that you’re after.

Don’t forget to Subscribe to our channel and click the notifications bell to be alerted on all our new videos.